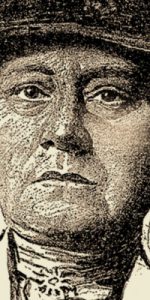 ON THE MORNING of February 15, 1912, a Thursday, George Schweitzer stepped out of his doorman’s office inside the French Renaissance lobby of America’s largest hotel, the Broadway Central, in New York City. The harsh winter sun was just slanting down East Third into Broadway, and hundreds of guests hurried in and out of the hotel’s doors. The massive American flags on each of the three Gothic towers hung slack against the winter sky.

Schweitzer saw the taxicab driver, Geno Mantani, idling near his stand, still waiting for his employee Sam Lefkowitz to get back from uptown, where he was having a half dozen tires fixed.

“Bank call. Go over there,” Schweitzer said, motioning to East River National, across the street.

Mantani got up on his box and set his machine into gear. He was an extremely lucky man. Between fifty and a hundred taxicab chauffeurs operated in the city, but he had been fortunate enough to contract for East River National’s business about a year before. That meant regular work….

At that point in New York’s history, the city was like a mark falling victim to the swindler’s graft, naive enough to hope for a metropolis that would contain its nearly five million citizens in peace, and canny enough to desire more—ever taller buildings, an infrastructure that might surpass the marvelous underground railroad that had been rattling beneath the town since 1904, and larger fortunes than even the Rockefellers could amass.

The years of brute crime in the city—the regular Five Points gang-style rioting, for instance—had passed back in the late 1800s. Banks might lose track of funds, but that was through the crisp forgery of a first-rate scratcher. Somehow the denizens of the metropolis believed that this island of Manhattan, and across the river the crystallizing Brooklyn fed by the Brooklyn, Manhattan, and Williamsburg bridges, could amass fortunes, house the downtrodden, hide away the Burney Blowers blasting cocaine up their noses through rubber hoses, and absorb those disparate lifestyles in relative tranquillity. While a wife might plunge a knife in her husband’s chest, or a jewelry store watch might get pinched, strangers for the most part would never harm strangers, institutions would never be touched by violence.